Q. How long have you challenged yourself to the annual art challenge Inktober and what inspired you to try it?

A. This will be my sixth year, the first year I didn't finish. I created some neat art pieces that I may make into cards, one day. My daughter who is an artist challenged me and I had so much fun, I in turn, challenged my mother too. Three generations, one annual art challenge that runs October 1 through October 31.

Q. You've published three of the four books? When do we get to see the fourth book?

A. The fourth book will release this October. I didn't plan on it ending on a cliff hanger and it seemed wrong to make fans wait an entire year to read the sequel, so I decided to release the 2020 and the upcoming 2021 work this October 31, 2021.

Q. So tell me the story behind the cover of your Hallowinks Halloween Blizzard? I heard you were sick when you created it and don't like it.

A. True. I wish I could re-create it, but I'm a purist and changing it would not be the cover I drew on 10/01/2018. Yes, I was sick. When I look at this cover now, I see the awful art, but I also know my fever went from 96.8 (my normal) to nearing 104 degrees in an hour, along with chills seven heated blankets couldn't help keep me warm. It came on so fast. I had another kidney stone stuck in the scar tissue from a previous stone and surgery, and the first time I went septic.

I remember the night I went to the ER after spending the day in Whitewater, my family was on the way to dinner, when I started getting the worst pain in my knee that I was crippled over. I ended up in the ER, but they were so busy I had a nurse practitioner, and I could swear having me slip into a gown and having my knee looked at may have revealed a dry snake bite, and it was all black and blue. I didn't even know until I came home and went to bed. That nurse told me, I had to stop worrying about going septic, again. The chances were nill. I guess he was right, until almost three years I would be, again, septic.

They needed to operate but I was septic for the second time in a few years and not only that, my oxygen was too low to operate on me. I remember crying to the Mayo Clinic doctors, "You can't just let me die." It was horrible. Then a doctor, I would put her name here but you would think I was joking. She finally told me no one wanted me on their operating table because they didn't think I'd survive.

So they kept me in observation overnight. Sent me home against my will. I kept telling them I was septic. They called me back the next day after seeing how deathly sick I was. I needed to be there ASAP. My kidney was septic with an infected stone and every minute counted. I remember telling them, "I though no one wanted me on their table."

I also remember the worry in the doctors eyes, a young lady who didn't want a death on her table--I could see that much. And I remember her words, "We have no choice. If they didn't try I was going to die."

I was so happy to learn the Minnesota Dept. of Revenue was wiping out my bank account at the same time I was trying to survive or die trying.  This was still over an employee from 2004, that our accountant didn't file some form on. $50-80-200K later in payments, seizures, withdrawals that the crooked credit union marked as commercial withdrawals but really just took the money (along with writing an e-check on my account, their board denying they represented that credit union and worse, no one at that credit union kept track of anything they kept taking and collecting for their own pockets. I remember the day the president called my husband and screamed so loud, she could be heard across the room giving my bank information out to my husband (he was not on the account, and she had no right talking with him). I had been a customer for over 20 years, with a flawless record. Except where they suddenly closed out my twenty-something year bank account, put that account in a negative balance, opened a new account and put funds in it, no signature card, no notice, nothing to me. I remember her screaming to my husband, "Tell that F....ing B#@KT that I am closing all her accounts." I heard that much. Then they went and consolidated all my accounts to one account and put it in the name Ecompass Forensics. I gave that to the Minnesota "official" that I won't mention here any more than that credit union.

Evidently, they did temporarily or threatened they were shutting down her credit union because of this "activity." There is so much more. How do you win against a corrupt credit union and Tiffany Asher, an IRS agent who told me I wasn't a best selling author and if I was, laughingly, told me I must be making a lot of money and where is it? I offered screen shots, even though I'm sure she'd seen them. That and I found out the rest, later and how the scheme was set up between the credit union, employees, officers, and the story goes on. I guess by know you know  I woke up, broke, again.

I want to say, for the record, the vulture, V-Neck, he was created from another inspiration, not the Minnesota Dept. of Revenue, a corrupt Rochester, Minnesota credit union whose backed by an agency that stated they don't represent them, even though its posted on their ads, website and other incriminating places.

If you are wondering what I did so horribly wrong? Sometimes you are a target. Sometimes others, and I have the list, can make things look like they are true that aren't. I won't spend the rest of my life dwelling on all these "adventures" I have rest coming as fast as it hit my dad and sister. Pushed through the pandemic, pushed through my husbands' cancer, pushed.

There are no police agencies that want this magnitude of evidence, everyone is "understaffed". It's easier to look the other way and so they did, do, and will again and again.

To stand again is to trust Jesus. That's where you'll find me. As for that credit union? They still operate. They finally wrote a check made out to my name, not a fictitious name they created, along with signature cards I never signed, along with an e-check I never created or authorized. An FBI agent once told me, (they referring to another situation) only have so many tricks in their bag, and when they use it again, we'll have them."

Try writing a post-it note on the drive over with the words "I love you" to every person you know and love because you're not sure you'll be coming home and you don't want to forget anyone. In fact, I didn't even want to go back. I had lost all my faith in Mayo Clinic.

Then. God revealed His Plan B. What are the chances that your old BFF you haven't seen in 20 years, and a BFF who lives in Alabama, both showing up at my store, at the same time -- when I was supposed to be at work? None. Alabama Duckie convinced me to go back. I'd already missed my friend Susie. I was seriously so afraid I almost didn't go. I had too many dreams. Too many things to do. I didn't want to be the next family death, or put my family through another death, not after loosing half of our family in the past few years.  What were my options, really? Die at home in the house and room my sister died in? Have my daughter find me like her stepson found her? Or die on a hospital bed in an ER if I didn't survive?

That's what I see in that blue cover. A blizzard of emotions and fears. I had a different idea for that years' book. My daughter asked me to draw cryptids, so I did.

On 10/31/2018 I finished the last drawing a little after midnight and spent the next several hours assembling the book and published it on Amazon. Later that day or night or maybe it was the next day, it became a Hot New Release, in categories I never wanted to be known in . . .  there it sat at as a best seller in the Horror category. It's still a running joke among our family that I'm a best selling Christian horror author.

From sepsis to best seller in Horror, that's what that cover says to me. 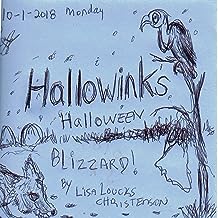 As the Hallowinks are en route to the Hallowinks Halloween Party, a blizzard hits Hallowink Hollow leading V-neck Vulture back in time a month, and on a detour through Cryptid Hideout, home of the legendary cryptids rumored to live there. V-neck's unintended flight plan lands him face to face with the famous legendary creatures.

Will V-neck Vulture be able to escape the monsters of Cryptid Hideout and make it home by Halloween? One things for sure: V-neck has lots of stories of his own to share with the Hallowinks . . . if he can escape this adventure and find an exit and path home from this 31-day-cryptid-hideout-horrorfest!
Read more